Epcot is no ordinary theme park.  Visitors to Epcot get a sense of its immense scale even before they pass the ticketing counter, and the massive structures that house the rides and various themed pavilions are simply breathtaking.  Yet, Walt Disney’s original vision for an Experimental Prototype Community of Tomorrow was never meant to be a theme park, but rather a real-world, highly-planned city.  However the Epcot that did eventually emerge is still something truly spectacular.  Guests spend the day marveling at new technology on display alongside cultures from around the world in a mash-up only Disney could offer.  So whether you are a long-time fan of Epcot or have never been before, take a look at this list of secrets we’ve uncovered and impress your friends and family the next time you find yourself in the shadow of Spaceship Earth (the big golf ball shaped building everyone talks about).

The Seas with Nemo & Friends (formerly The Living Seas) aquarium in Epcot is the second largest aquarium in the US. It uses 5.7 million gallons of saltwater. In fact the “Spaceship Earth” sphere could fit inside it.

Epcot was originally designed to be home to 20,000 residents.  According to Jack Lindquist, the senior vice president for advertising, publicity, promotion and public relations in 1982, Walt’s plans for then EPCOT Center were rapidly discarded after he died, “because of the difficulty of establishing any kind of a real community life in a place where thousands of tourists would come tramping through every day.  We could have called it anything but if we had opened it under another name, the media would still be asking, ‘But when are you going to open EPCOT?'”

When the World Showcase was built, space was left for 10 additional countries. Since then, Norway and Morroco have been added, leaving room for 8 more.  The 1982 book Epcot Center: A Pictorial Souvenir lists Israel, Equatorial Africa, and Spain as potential pavilions.

The Rose & Crown restaurant at the United Kingdom pavilion got its name from the two most common words found in pub names in the UK.  They also serve up excellent Bangers and Mash in case you didn’t know.

If you’ve looked out across the water at the World Showcase, you’ve probably looked right at the Tower of Terror and never even noticed it!  When they were building Disney Hollywood Studios (formerly MGM Studios), the Imagineers knew that the Tower of Terror would be visible from Epcot and there was no way around it. Their solution?  They designed the tower to blend into the color and style of the Morocco Pavilion.  We always thought the Tower of Terror’s color was an interesting choice given the nature of the ride.

Those beautiful statues that look like marble in the Italy pavilion are hollow. Since they were so lightweight and liable to blow away during the slightest breeze, they were held in place with rods running from their base through the hollow center.

Most numbers at Epcot have some sort of hidden meaning associated with them.  On the ride Soarin’ at The Land pavilion you’ll board flight number 5505.  The meaning?  Soarin’ debuted at Epcot on May 5, 2005.

The Eiffel Tower that stands over the France pavilion was built at approximately 1/10 the scale of the real Eiffel Tower.  It stretches 103 feet high.  The tower uses forced perspective by being wider at the bottom and narrower at the top in order to make it appear taller than it actually is.  Disney uses natural bird deterrents to prevent birds from sitting on top of it because this would ruin the illusion.

The incredible World Showcase lagoon spans around 40 acres.  If you walk around the entire lagoon from Mexico to Canada, you’ll cover a distance of around 1.25 miles.  Don’t forget to wear your sneakers if you plan to walk to all the pavilions!

In many traditional construction projects, a building is given an honorary “topping off” ceremony upon its completion and an American flag is displayed on top.  However, the Spaceship Earth geosphere had to be built in the opposite direction, essentially top down.  So upon its completion,  a “bottoming out” ceremony was held instead and a flag was placed at the bottom of the giant sphere.

Every 60 days, the Biergarten restaurant in the Germany pavilion serves up 26.2 miles of bratwurst.  We know Walt Disney had an affinity for hot dogs, so we think that’s a statistic he’d be proud of. 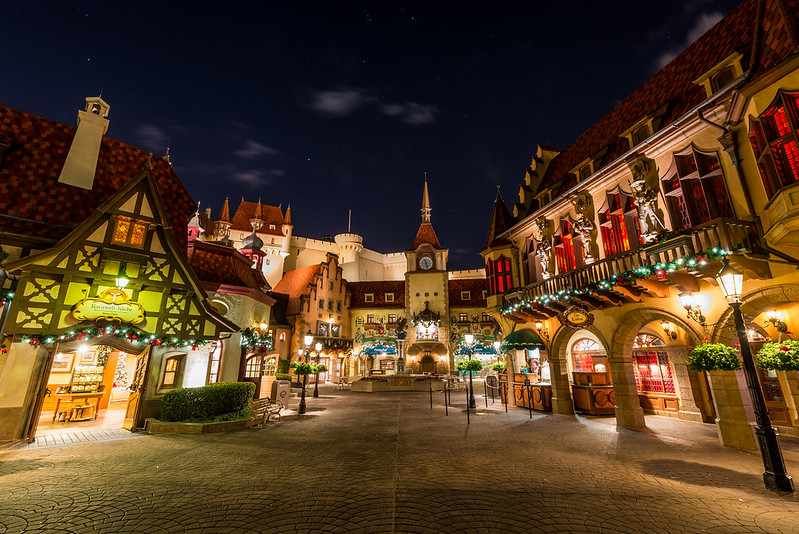 To light up the pavilions in World Showcase during the nightly Illuminations: Reflections of Earth show, more than 26,000 feet of lights are used.  Some 28,000 fireworks shells are fired during each show.  The Earth Globe that acts as the centerpiece of Illuminations: Reflections of Earth uses 400 gallons of propane every night send balls of fire soaring 60 feet into the air.

The mosaic surrounding the entrance to The Land Pavilion spans 3,000 square feet. It features 150,000 tiles made in 131 colors, and took 3 months to install.  There are several reported Hidden Mickeys to be found in the mosaic, one is shown here.  After all, this is the Hidden Mickey Society website, so we had to show at least one.

The plants in The Land pavilion are not just for show.  Take the boat ride and you’ll discover that the fruits, vegetables, fish and other things grown in the pavilion are served at Walt Disney World restaurants every year.  More than 30 tons in fact!  You might spot a tomato tree during the ride which holds a Guinness World Record for a one-year yield of an amazing 32,000 tomatoes, with a total weight of 1,151 pounds!

The WED one-eighth-inch scale model of EPCOT Center (also known as Progress City) took up 1,428 square feet.  That’s as big as many average American homes at the time of its creation.  Its massive size was one of the reasons it was dismantled and never stored for future use.

Epcot’s unique blend of cutting edge technology mingled with cultural flavors from around the world make it one of our favorite Disney theme parks.  The items mentioned here are only a handful of the many secrets that exist in this amazing park.  What hidden insights do you have about Epcot?  Please share in the comments.